The Barden: Building a Better Bridge to the 21st Century

At the Herrontown Woods Barden (short for Botanical ARt garDEN), we like to think we're building a better bridge to the 21st century. 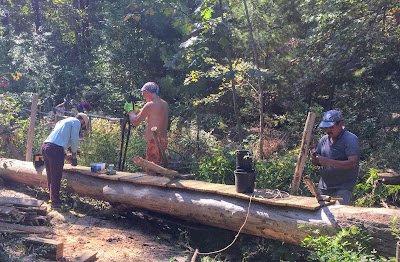 In this case, it's literally a bridge. The Barden is a collective enterprise that has emerged out of a "fallen forest", where storms had blown down a pine grove planted long ago. Rather than neaten the place up by removing the dead trees, we have used those fallen trees as features and building material. Rootballs have become backdrops for gardens and displays, and in this case a sturdy trunk is becoming a bridge. 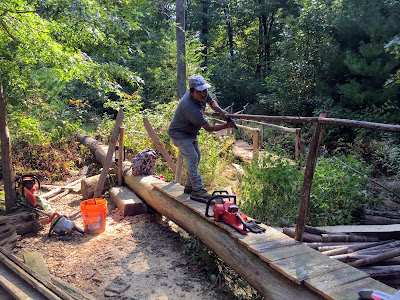 For this bridge, Victorino is the primary visionary and craftsman, using skills and strategies he learned in his home country of Guatemala. 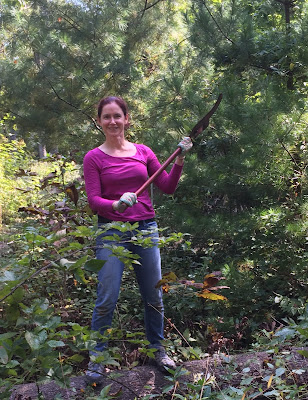 FOHW board member Keena was delighted with the project and helped clear blackberry brambles obstructing the route of the new bridge. 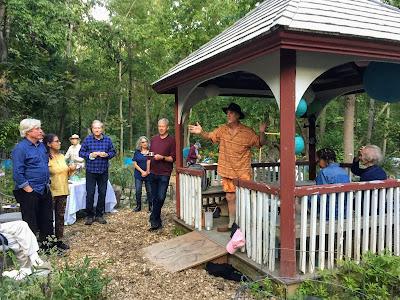 At a recent gathering, main caretaker of the Barden Andrew Thornton thanked the many volunteers who have made the Barden a home to delight and whimsy, along with all the native plants that border its winding pathways. He gave particular thanks to Rachelle Rebarber, Becca Shipan, Ethan Lee, and board member Keena Lipsitz for their devotion to the project in recent years.
The Barden works beautifully for a garden party, with many conversations scattered across its varied nooks and crannies, yet keeping a sense of a common gathering. 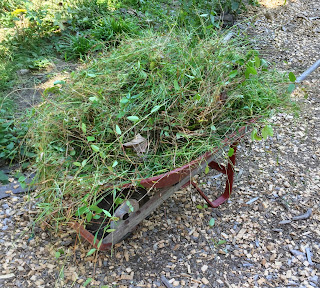 The next day, with some extra inspiration provided by the party, it was back to pulling stiltgrass and other weeds. Four years ago, the area we now call the Barden was a dense thicket of invasive, nonnative shrubs and vines. Kurt Tazelaar made it a project to turn the tide early on, laying the foundation for all the work volunteers have done since. In addition to 130 species of native plants, we also have a meditation garden, a zen garden, and particularly popular is the fairy garden of moss, sea shells, and mushroom sculptures.
Volunteer workdays are Sunday mornings starting around 10am and continuing into early afternoon.
Posted by Steve Hiltner