Letter in Town Topics about the Princeton Botanical Art Garden 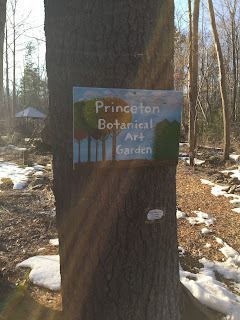 One thing the Friends of Herrontown Woods has had to overcome is its acronyms. FOHW sounds like faux or foe, but sounds better when turned into the stirring call to action: FOHWard! Likewise, the grand-sounding Princeton Botanical Art Garden has the less than fortunate acronym PBAG, which somehow doesn't capture the beauty and serendipity of the enterprise. Thus this proposal to call it the BARDEN, short for Botanical ARt gardDEN. And if the Barden brings out the bard in those who visit or work there, all the better.

The following appeared in the Jan. 13 issue of Town Topics.

This past year, as the pandemic closed down indoor destinations, many people turned to Princeton’s nature preserves for diversion, renewal, and exercise. Coinciding with this surge in what is often called passive recreation has been an acceleration in several projects along the Princeton Ridge where people take a more active, restorative role in nature. Initiatives by the Friends of Herrontown Woods, the Friends of Princeton Open Space, and the Ridgeview Ridge Trail Blazers have all gained momentum, benefiting from an influx of volunteers.

On the eastern side of town, our relatively new nonprofit, the Friends of Herrontown Woods, founded in 2013 to make Princeton’s first nature preserve once again accessible after years of neglect, has overseen the rapid evolution of a space we now call the Princeton Botanical Art Garden. It began three years ago as a small loop trail through a former pine grove decimated by windstorms. As invasive species took hold among the fallen trees, we saw the opportunity to create a rare habitat — a sunny forest opening. Removing rampant invasive growth and planting sun-loving native wildflowers and shrubs, our first goal was to create a space where people could come to learn about native flora.
But the botanical garden took a cultural turn this year as artists and students displaced from school began building structures amidst the wildflower beds. A boy made a fort. Several high schoolers built a yurt. A chainsaw virtuoso cut planks and handrails from fallen trees to build a whimsical but sturdy bridge over a small wetland. Using massive upturned root balls as backdrops, a spiritual gardener created a meditation garden, and a daughter and mother created an exhibit of wildlife bones.

Another family dug a miniature frog pond that attracted real frogs. Rocks were gathered from a nearby construction site to line whimsical trails. Most recently, considerable resourcefulness and imagination were applied to moving a donated shed and gazebo to the site. Witnessing the joy visitors were experiencing, we knew we were on to something. One parent of young kids described the art garden as “a lifeline.”

If there were ever any doubt, the pandemic has proven the worth of Princeton’s investment in preserving open space, beginning with the visionary mathematician Oswald Veblen’s personal and professional efforts in the 1930s to acquire lands that later became Herrontown Woods and the Institute Woods.
But at the Princeton Botanical Art Garden we have discovered the pleasures and ecological benefits of going beyond preservation and passive appreciation to create an in-between space — part nature, part culture — where human imagination and resourcefulness can collaborate with nature’s unparalleled creativity and generosity. By locating ourselves within nature, learning from it and giving back, we can begin not only to heal nature, but also heal ourselves.
Stephen K. Hiltner
Posted by Steve Hiltner