Trail Work in Herrontown Woods in 2020 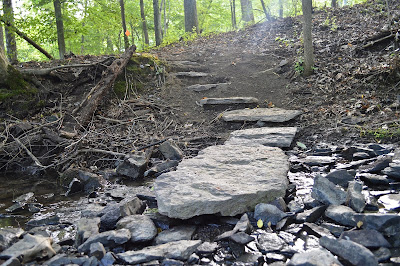 Herrontown Woods gained a new trail in 2020, a loop trail that winds through 7.5 acres donated by the Windy Top development that fronts on Snowden Lane. A couple years ago, FOHW convinced the developer that our environmental nonprofit was much more likely to take good care of the greenspace than the homeowners association that would otherwise own it. FOHW then convinced the town of Princeton to accept the donation, which actually took some lobbying.

Since then, with help from a crew contracted by Princeton, FOHW has been battling a massive clone of wisteria that had already overwhelmed and downed several trees. But nothing compares to this year's transformation of the forest by Kurt Tazelaar, who built the trail using large stepping stones scavenged from the building site, and cut down masses of invasive shrubs that were clogging the understory and blocking views of the scenic valley. The trail includes several carefully crafted stream crossings and passes by some impressive trees that have thrived on the slopes overlooking the stream.

The trail can be accessed by heading down the red trail from the parking lot, then taking a left just before or after reaching the stream.

Other projects Kurt undertook in this year were scenic bypasses of two badly eroded sections of the red trail, and some clearing of invasive shrubs near the cliff. After nearly a year fighting an illness, Kurt was able to return and has again made a big difference in Herrontown Woods this year.