The initial lease is for five years, with the expectation of a longer term lease to follow as FOHW develops and implements rehabilitation plans for the Veblen House, Cottage, and grounds. 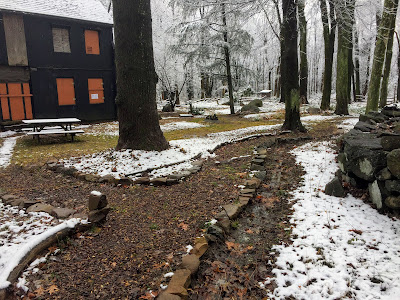 The lease, the product of a yearlong negotiation, comes twelve years after botanist Stephen Hiltner happened upon the abandoned Veblen House while conducting a plant inventory of Herrontown Woods. In 2013, Kurt and Sally Tazelaar joined him to reopen the nature preserve's long neglected trails. They formed a nonprofit the next year, gained supporters to help fight off Mercer County's attempts to demolish the buildings in 2017, and convinced the town of Princeton to take ownership of the preserve. While waiting to gain an official arrangement with the town through the lease, volunteers have been clearing invasive species, sprucing up the grounds of the House and Cottage, and keeping the buildings secure until they can finally be put to the uses the Veblens envisioned nearly fifty years ago.

The meeting will be in council chambers at town hall, 400 Witherspoon Street, beginning at 7pm.