Thanks to the Gert Volpp Family and Friends 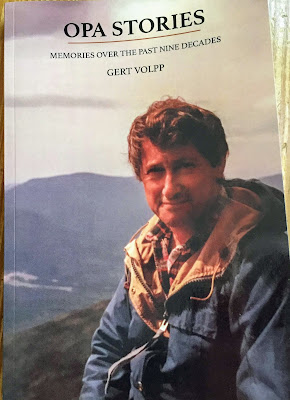 A year ago, I had not heard the man's name, but now every time I encounter a father walking with his kids along a trail in Herrontown Woods, I think of Gert Volpp. After doing post-docs alongside Nobel Laureates in chemistry, he and his wife Ching moved to Princeton in 1963. The Veblens had donated Herrontown Woods as Princeton's first nature preserve only six years before, and Elizabeth Veblen was still living next to it in what we now call the Veblen House. The Volpps started a family, and before long Gert began bringing his kids to Herrontown Woods for hikes. Many others who grew up in Princeton remember the Volpps, and that time in the 60s and 70s when Herrontown Woods served as the primary destination for Princetonians wanting to immerse themselves in nature.

When Gert died earlier this year at the age of 88, his daughters and son remembered those days and asked friends of the family to contribute to our Friends of Herrontown Woods nonprofit in his memory. They appreciated that our group of volunteers had adopted the preserve in 2013, reopening trails that had all but disappeared for lack of maintenance. Thanks so much to the Volpps and their many friends from around the country who have now given more than $4000 to help us maintain the trails and create interpretive signage!

Gert was an avid hiker who loved adventure, and I can't help but think that the boulders of Herrontown Woods reminded him of his many hikes in the Alps. He left behind a wonderful collection of stories from his life, called Opa Stories, with adventures, quiet humor and life lessons, beginning with his childhood in Germany. Much of it can be read online at the link.

The obituary, pasted below, tells of a remarkable life and loved ones. It's fitting that Gert has a brother named, Kurt, given that Kurt Tazelaar has been the main force in restoring and improving the trails at Herrontown Woods.

Born in Lörrach, Germany, in July 1930, he was the second son of the late Anna Zeller and Otto Volpp. He received his Ph.D. degree summa cum laude from the University of Basel with a doctoral thesis on the structure of the African arrow poison ouabagenin (“Zur Konstitution des Ouabeginins”) under the direction of Nobel Laureate Thaddeus Reichstein. He arrived in the U.S. in 1958 to begin a five-year postdoctoral fellowship in chemistry at Harvard University, where he engaged in a total synthesis of colchicine with Nobel Laureate Robert Burns Woodward. At Harvard he met Ching Yuan, a postdoctoral fellow working with Nobel Laureate Konrad Bloch. The two were married in Oxford, England, where Ching, originally from Beijing, had a second postdoctoral fellowship with Sir Ewart Jones. They settled in Princeton in 1963, where they raised four children. Gert lived in Princeton for 55 years.

In 1963 Gert began a 38-year career at FMC Corporation, serving as Director of Commercial Development, Research and Development, Agricultural Products Group from 1978-2001. He traveled worldwide negotiating contracts with research laboratories for insecticide research and development. Initially focused on Japan and Western Europe, he extended the purview of FMC’s negotiations to Australia, China, Korea, India, and Eastern Europe. He held patents in the U.S., Canada, Mexico, France, Spain. Switzerland, Uruguay, the United Kingdom, Belgium, South Africa, the Philippines, Romania, and the Soviet Union.

He was predeceased by his wife Ching, and is survived by a brother, Kurt Volpp of Mosbach, Germany; a sister, Helga Reichel Kessler of Rheinfelden, Germany; three daughters, Sophie and Leti of Berkeley, Calif., and Serena of New York City; a son, Kevin, of Wynnewood, Pa.; and seven grandchildren, Daniel, Anna, Thea, Julia, Daphne, Nico, and Liliana.

Gert was an avid hiker, and loved hiking in the Alps. He spent his 80th birthday hiking in Yosemite. Until the birth of his children, he enjoyed piloting both small planes (the Cessna 182) and gliders. For his 86th birthday, he went paragliding, jumping from the Elfer mountain near Innsbruck, Austria. He was also an excellent storyteller, and a member of the memoir writing group at the Princeton Senior Resource Center, where he began his memoir, Opa Stories.

In lieu of flowers, contributions may be made to the Friends of Herrontown Woods (fohw.org) in his memory.

The Friends of Herrontown Woods is grateful for donations as we work to bring Herrontown Woods back to its former natural and cultural glory, including renovation of the Veblen House and Cottage.
Posted by Steve Hiltner