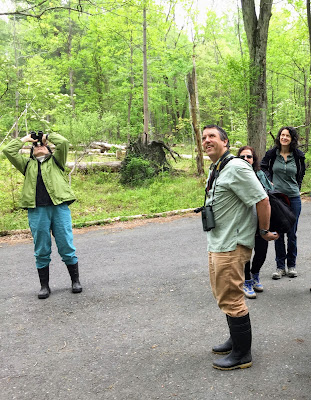 The nature walk this past Saturday at Herrontown Woods with John L. Clark began in the parking lot while we were waiting for everyone to arrive. Thankfully, the only no-show was the rain in the ever-shifting predictions leading up to the walk.

Impressed by the diversity of birdcalls he was hearing, John pulled out a bird calling contraption (looked like this one) and began playing the call of a red bellied woodpecker. A real one quickly responded, flying in to have a closer look. John then played the "Teacher! Teacher!" call of an ovenbird, and again began a dialogue with the real thing nearby. Though it was a mechanical contraption, it seemed almost like John had a bird in his hand, calling out to the woods that surrounded us. 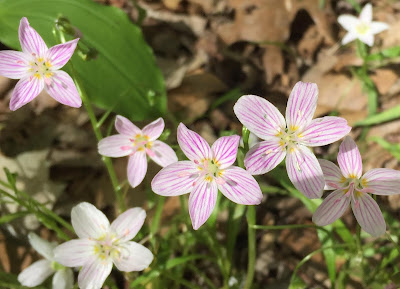 After checking out the growing tadpoles in the two vernal pools just down from the parking lot, we passed by a broad patch of spring beauties. This is the most common spring wildflower in the preserve, and John pointed out that it is also highly edible. 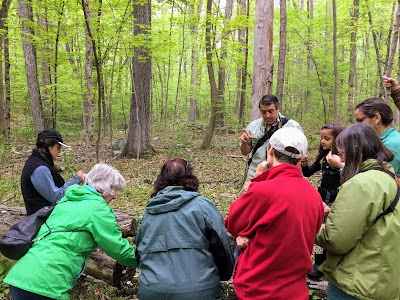 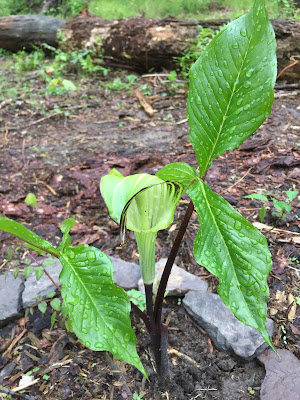 John's knowledge of tropical flora also came into play with our common wildflower, Jack-in-the-Pulpit, which he explained produces heat in the flower, something I'd been aware of only in another common native plant in the Araceae family, skunk cabbage. Apparently all flowers in that family have heat-making ways. Producing heat can help volatilize the chemicals in the flower that attract pollinators. 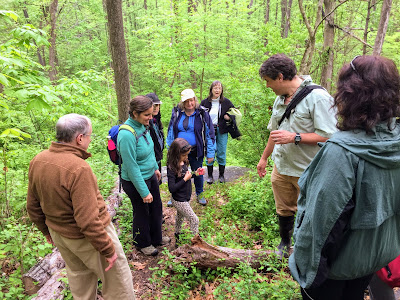 John's daughter had an uncanny knack for making tropical birdlike sounds, provided a delightful soundtrack for the walk.

As we approached the second stream crossing, the beeches and musclewood trees became more numerous, and John pointed out that they, unlike other trees, have smooth bark. This strategy is common in tropical trees (John has spent many years in Ecuador studying plant life there), where smooth bark makes it harder for animals to climb and for epiphytes to attach themselves.

Some internet research after the walk brought up a short BBC article giving some pros and cons for smooth bark vs. thick furrowed bark. 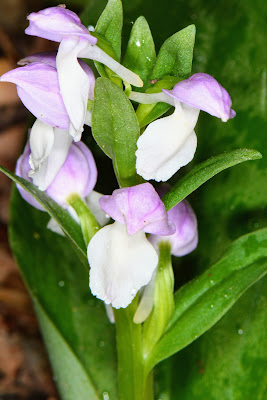 The star of the walk was the showy orchid, found nowhere else in Princeton, as far as I know. Volunteers with the Friends of Herrontown Woods have been working to limit the growth of nonnative shrubs that tend to shade out spring wildflowers like this orchid. Nonnative shrubs, having evolved in a different part of the world, often have different biological clocks and tend to leaf out earlier, depriving the native spring ephemerals of the sunlight they need to store up energy for the next year's flowering. We were lucky that our walk coincided with the blooming of these plants, which are quite small but can be considered showy if looked at from close up.
(photo by John Clark) 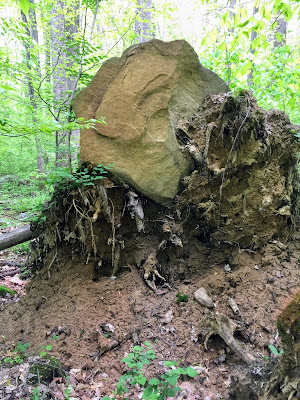 Walks in Herrontown Woods are always enlivened by the interplay of boulders and trees. Here, a tree's root ball had become so enmeshed with a boulder that the boulder was catapulted skyward when the tree fell in a windstorm. 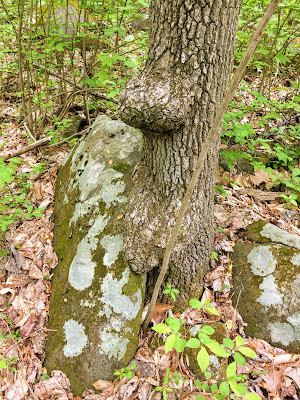 This tree looked like it was giving the boulder a smooch.

There was a visit to the cliff (not marked on the map), and a sighting of the lonely black vulture near the cottage. It lost its mate two years ago, but still returns to the farmstead, apparently steadfast in its attachment. The species' impressive commitment to family was very much on display two years ago. When a black vulture is soaring overhead, you can see the grayish silver tips underneath its wings, distinct from turkey vultures, which have silver running along the backside of the wing. 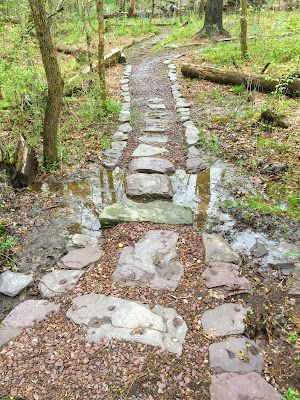 Afterwards, we had a tailgate gathering in the parking lot for refreshments and more conversation. Just off the parking lot is a botanical garden that FOHW is developing with labeled plants as an "intro to Herrontown Woods."

For those interested in learning more about our walk leader, John Clark, and his work at Lawrenceville School, there is a new exhibit there with O' Keefe-like images of plants he has discovered in Ecuador, along with photos documenting his annual treks with students to the tropical forests there.

Thanks to John for leading a pleasurable walk and adding to our insights into life at Herrontown Woods.
Posted by Steve Hiltner