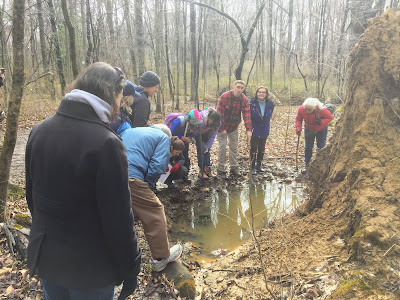 We had a wonderful nature walk at Herrontown Woods on April 6, led by Hopewell science teacher Mark Manning. Mark had been exploring the preserve with his son in recent years, and had reached out to the Friends of Herrontown Woods to share his findings about the amphibious life in the preserve.

The day began cool and wintry, as we gathered around one of the vernal pools just down from the parking lot. We wondered what there would be to see, since one of the main attractions, the adult frogs we'd seen a week prior, had disappeared back into the woods after laying their eggs.

As Mark explained the remarkable behavior of wood frogs--their capacity to remain frozen for long periods in the winter, the frenzied ritual of spring mating, the symbiotic relationship between their egg masses and an algae--we picked up a few eggs from the pool and found that the tadpoles were already hatching. 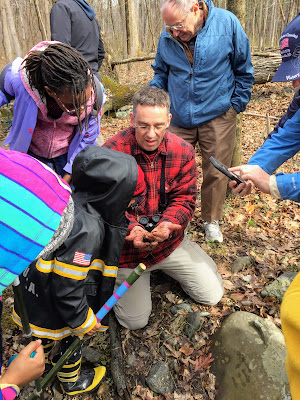 There was layer after layer to Mark's fascinating descriptions, as he found other amphibians under leaves and rocks. 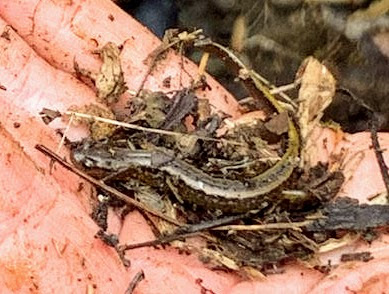 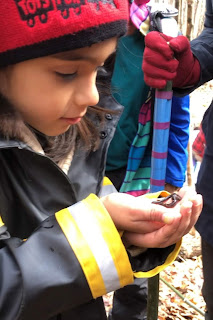 They are improbably light, soft, skinny creatures to hold. 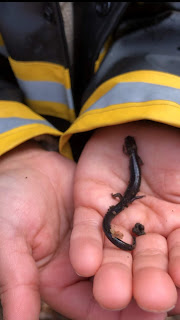 This photo was taken just before the salamander crawled up under the boy's sleeve. 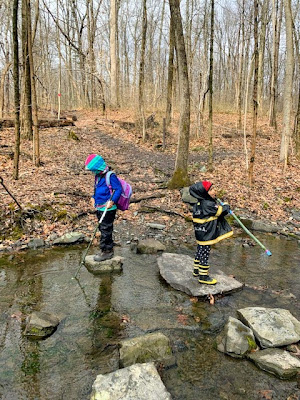 We had ventured no more than a few hundred feet from the parking lot, but Herrontown Woods' charms were already beginning to draw us in. This is probably the cleanest stream in Princeton, as nearly all its headwaters are preserved as part of Herrontown Woods. 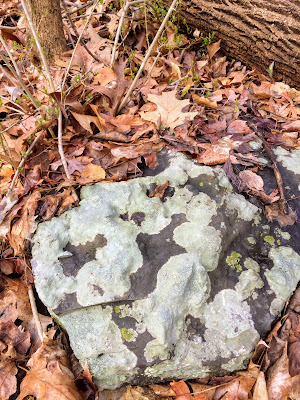 Each rock has its own pattern, decades in the making, as animate and inanimate worlds seem to merge and collaborate. 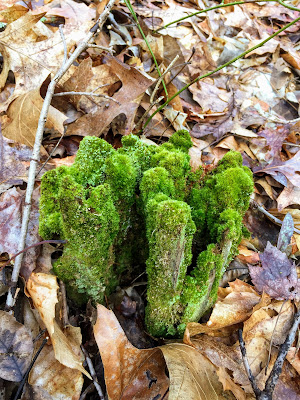 Dead wood remains a substrate for new life, in the form of moss 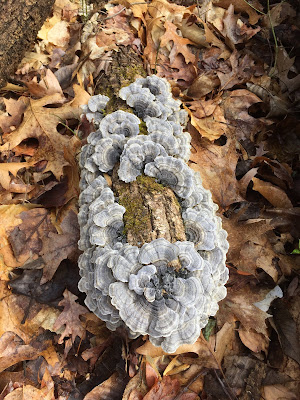 or mushroom. Peter Ihnat, who came on the walk, shared some of his knowledge of these "turkey tails" and other mushrooms. 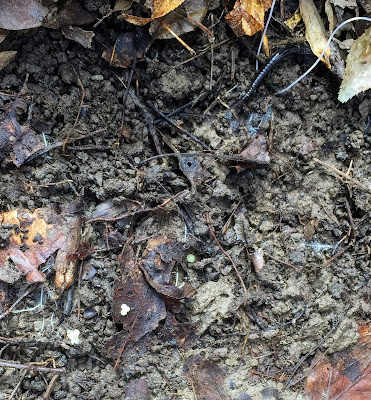 Under some leaves, Mark found salamander eggs (the small white dots in the lower left, while the salamander's tail can be seen at the upper right of the photo). 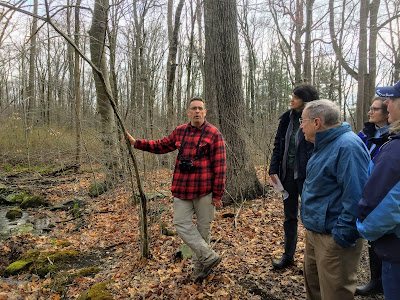 Talk periodically shifted to the plant world, with Mark describing the incredible hardness of musclewood, and its applications. 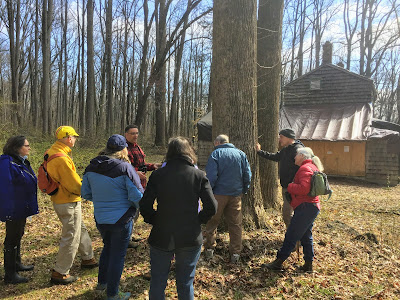 Under two towering tulip trees, Mark pulled out some rope he and his son had made from natural fibers. 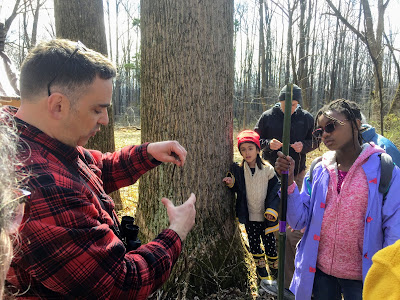 He then proceeded to make rope from the bark of tulip tree, using a "reverse twist two-ply" method. 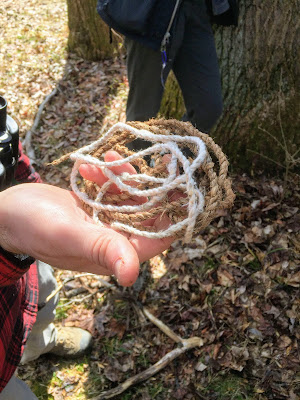 The white twine here is made from milkweed fibers. He said that dogbane is the best material to use. (Both milkweed and dogbane are in the dogbane family. Another common name for dogbane, Indian hemp, now makes sense, given that hemp is a plant whose fibers are used to make rope.)

We then headed over to Veblen House for refreshments and socializing. As we were gathered next to the house that Oswald and Elizabeth Veblen once called home, one of the kids who had been quiet all morning said to me, "I wish it was still a library. I love libraries." It melted my heart. That was the original wish of the Veblens, stated in their will, yet not acted upon. Forty five years later, our nonprofit is seeking to realize theVeblens' generous vision, and also use the house as a museum and meeting place for talks and music.

Though the walk covered just a couple of Herrontown Woods' shorter trails, we felt like we had come a long way. Mark Manning's insights had opened up new worlds for us, especially for the three kids who came along. The day, too, opened up, beginning cool and cloudy, then warming as the sun broke through. Over the course of two hours, we felt like we had walked from winter into spring.

(Some of these photos contributed by FOHW board member Inge Regan.)
Posted by Steve Hiltner