A Winter Walk in Herrontown Woods 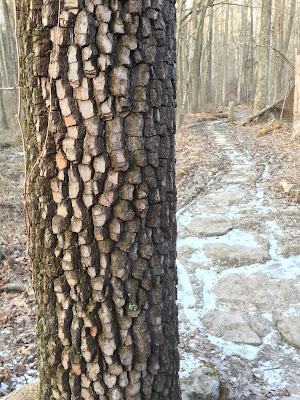 In winter, light floods the forest and vistas open up, with hints of dormant potential all around. It's a good time for a walk in Herrontown Woods. Halfway up to the Veblen Cottage, along the trail from the parking lot off Snowden Lane, is a small grove of trees with dark, knobby bark. Stop where the trail bends around the corner of a fence, look around you, and you'll see them. A couple have fallen, but five or six trees remain. These are native persimmons, a mid-sized tree struggling to compete for sunlight with the red maples and ash all around. Some may know the Asian persimmons with apple-sized fruits, grown in a few yards scattered around town. The native has smaller fruits that are extremely sour until they ripen into a rare and fleeting sweetness. 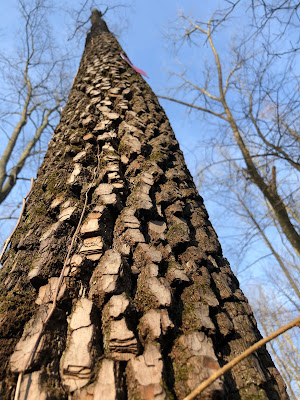 You can see in this photo that the persimmon has a very narrow crown, claiming a small patch of sky in the canopy far above. The nearest twig and bud is 50 feet up this slender trunk. Persimmons are dioecious (dye-EESH-us), which is to say that there are male trees and female trees, with only the females bearing fruit. Other dioecious woody plants at Herrontown include spicebush, Kentucky coffeetree, and winterberry. There is or was at least one female persimmon here, because I once found a fruit lying on the ground next to the trail. Standing next to one of these trunks, the tree can feel close and remote at the same time, with so much of its business being conducted out of sight, high above or underground. 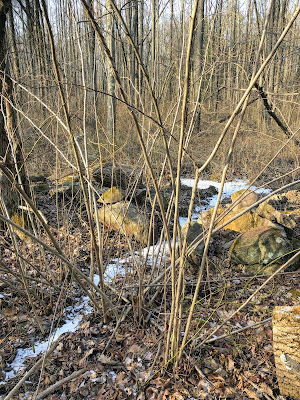 Far more reachable is another special, much smaller and more easily known tree just a few feet off the trail, growing underneath the persimmons. Look for a cluster of tan stems growing out of the ground near the rock wall and you'll see a hazelnut tree. A big ash tree fell on it a few years back, and we cut away portions of the stem so the hazelnut could grow unhindered. Whereas some kinds of tree are found throughout the forest, hazelnuts tend to be loners. Though the Friends of Herrontown Woods has planted more of them at Veblen House and the botanical garden, there are only a few hazelnuts growing naturally in the preserve, each far from the others. 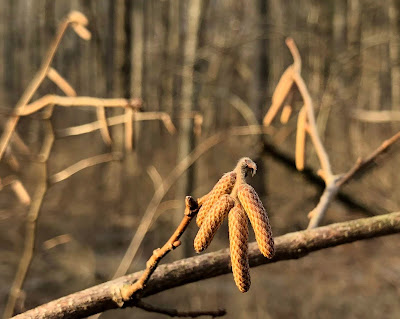 The many-stemmed plant doesn't appear distinct until you look more closely. These are the male catkins that will open later in the winter and early spring to release their pollen. 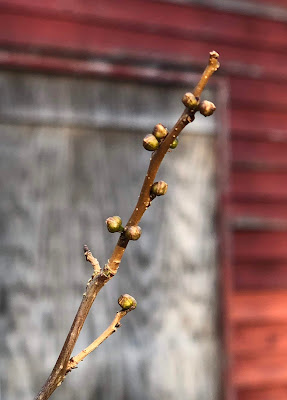 Continue up the path (the path is currently being rerouted to go through a pleasant grove of conifers near the cottage), and you'll emerge near the little red barn that is part of a farmstead built around 1875. Near the barn, and common elsewhere in the preserve, are spicebush. Look for shrubs with these small flower buds along the stem, then confirm by doing a scratch and sniff along the stem to smell the citrony fragrance that gives the shrub its name. Imagine early spring, a month from now, when small flowers emerge from these buds to create subtle clouds of yellow in the woods. The flowers quickly fade and by fall turn into sizable red berries rich with lipids for the birds. 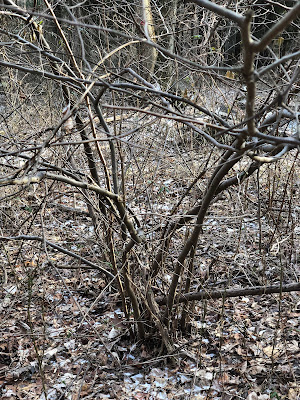 Now that deer culling has reduced the intense browsing pressure these and other native shrubs were experiencing a couple decades ago, the spicebush are flourishing, each with many stems emerging from the ground. 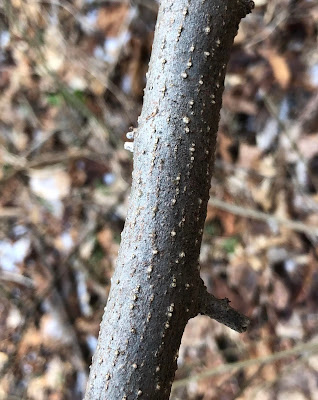 Look more closely at one of the stems to see the speckled bark. 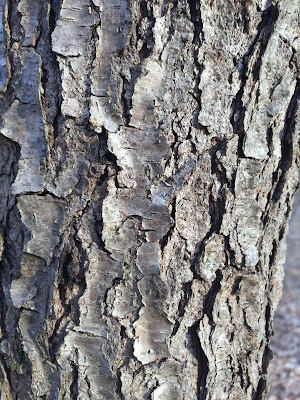 Taking a left down the green and white trail, you may encounter a tree with what my mother called "black potato chip bark." Black cherries are mid-sized native trees that eventually get shaded out by taller species, but some are hanging in there at Herrontown Woods. Unlike the furrowed bark of ash and oak, the cherry's bark is platelike, with subtle horizontal lines in the "chips." 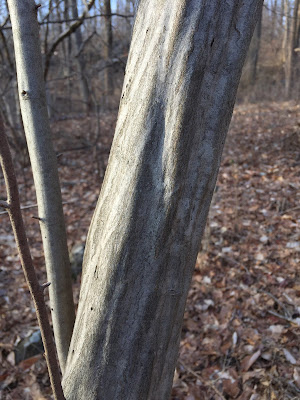 Contrasting with the rough bark of most trees is the smooth, sinewy look of musclewood, also known as blue beech or American hornbeam. 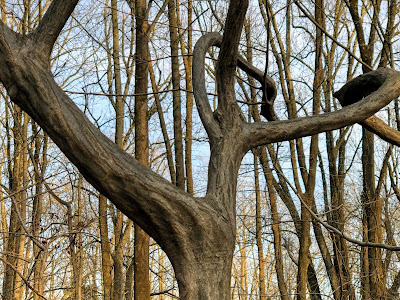 Each musclewood has a distinct shape, with this one achieving something akin to a pose in ballet. 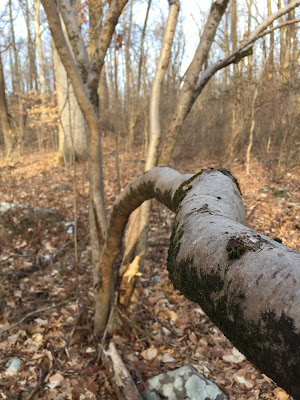 A short way into the woods on the right are the clustered stems of some very old witch-hazels. 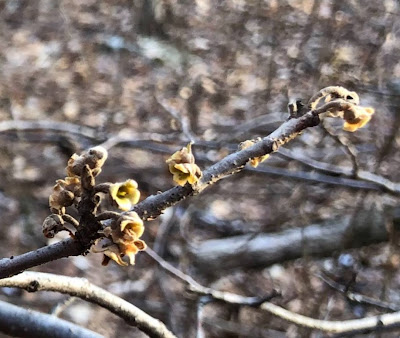 While the showy cultivated Asian varieties seen in town and at the university bloom early in spring, the native witch-hazel has a subtle yellow flower with four slender petals that emerges in late October, when most trees have gone dormant for the winter. In winter, the remains of last fall's flowers can be seen along the stems. Witch-hazels are fairly common in this area of Herrontown Woods, in moist seeps below the ridge. 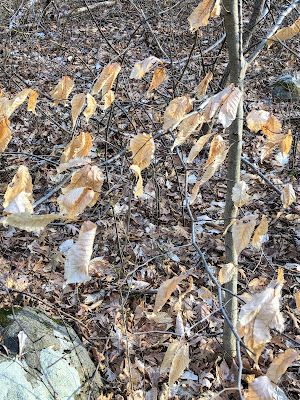 Further down the green/white trail, the yellow trail joins it from the right. Scan the forest and chances are you'll see pale brown leaves clinging to some of the trees. These are American beech trees, with smooth gray bark like the musclewoods but generally larger and without the sinewy look. 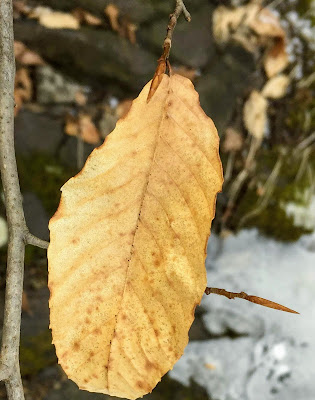 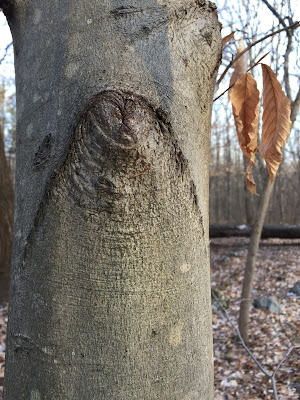 Scars where branches once were make distinctive patterns on the smooth bark of the beech trees. 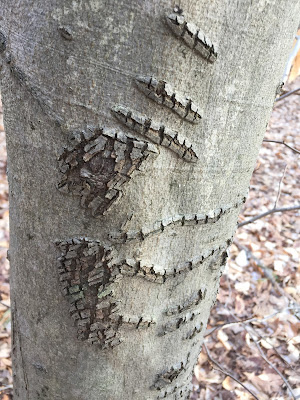 Not sure what caused these scars, but they almost look like a doctor stitched them up. 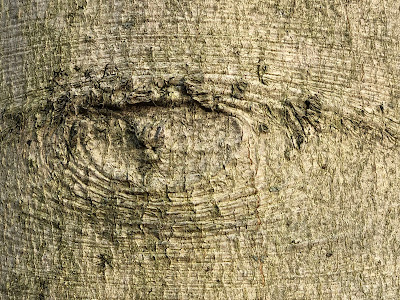 These are a few of the many kinds of trees at Herrontown Woods, and as you look with a newly familiar eye for more of these new friends in the forest, wonder if the trees have been looking at you all along.

The yellow trail follows the edge of a stream, which after many cold days and nights was frozen into endlessly varied shapes, with water flowing just beneath the molded crust. In some places, large bubbles could be seen traveling under the ice, their shapes constantly shifting and bending in the liquid current, flowing downstream like ghosts. Even in the day's fading light, still visible in water, rock, and wood is the endless variety of Herrontown Woods. 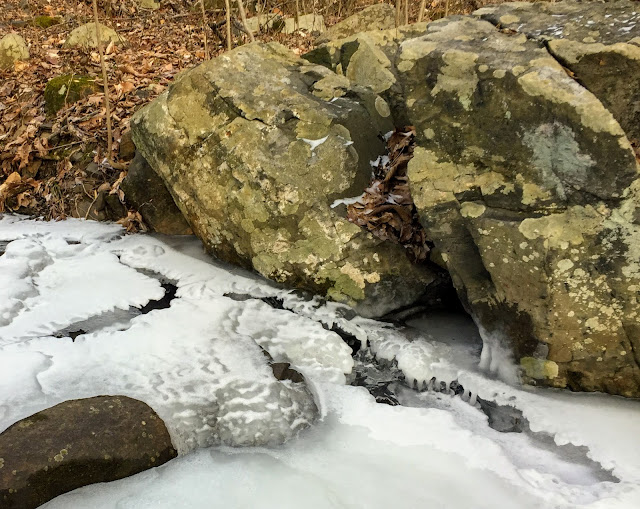