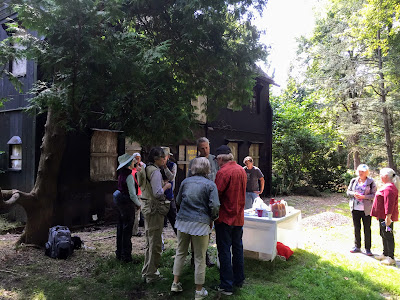 The Friends of Herrontown Woods and Princeton Veterans of Science and Technology co-hosted a science history and nature walk at Herrontown Woods Sept. 10. Reversing the usual sequence of events, we fueled up on refreshments and conversation next to the Veblen House before heading up the trails. 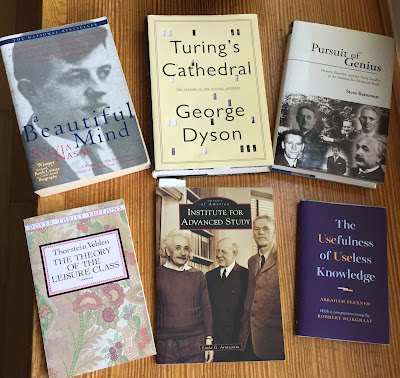 Some of the many books related to Oswald Veblen's mathematical and environmental legacy were available for perusal. George Dyson's Turing's Cathedral devotes a chapter to Oswald Veblen's contributions to early computer development. Veblen's on the cover of local writer Linda Arntzenius' book about the Institute for Advanced Study, and Steve Batterson's book about the Institute's early years, entitled Pursuit of Genius. A new book, The Usefulness of Useless Knowledge, doesn't mention Veblen, but author and IAS director Robbert Dijkraaf was kind enough to sign a couple copies to Veblen, "The first professor of the IAS", and "who brought the IAS to Princeton!" The Veblens are part of Sylvia Nasar's description of Princeton in the "Center of the Universe" chapter of A Beautiful Mind. And Theory of the Leisure Class is the most well-known book of Veblen's uncle Thorstein, who influenced economic and social thought in the early 20th Century and coined the term "conspicuous consumption."

Another book that made the trip is Herrontown Woods: A Guide to a Natural Preserve, by Richard J. Kramer, a Rutgers grad student who wrote the book as part of his dissertation research back in 1966-7. It was published by the StonyBrook/Millstone Watershed Association, which speaks to how central was Herrontown Woods as Princeton's go-to for nature walks back then. Focus began to shift away from Herrontown Woods in the late 1970s and 1980s, as Princeton Township and Mercer County acquired additional open space. Our work represents a reawakening of interest in this long eclipsed preserve, and the generous couple that bestowed it upon us. 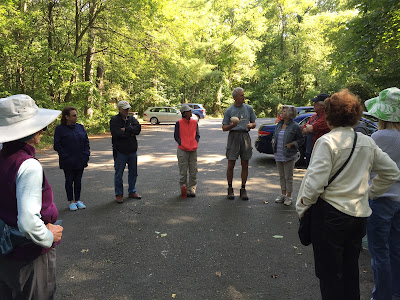 Stan de Riel gave an impromptu talk about pawpaws and puffballs, including some pawpaws to taste. 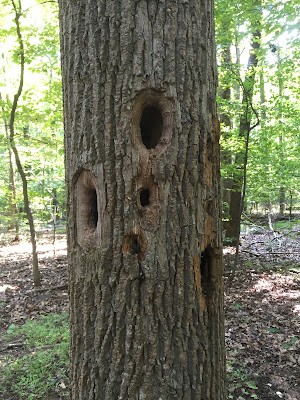 Along the blue trail, we first heard and then saw a pileated woodpecker, and the vertical, rectangular evidence of its past feastings. 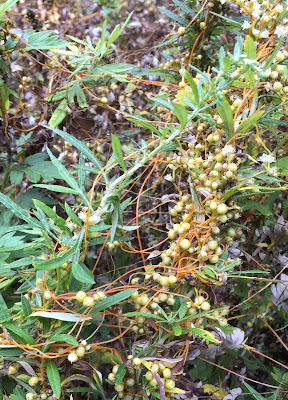 It's been a good year for dodder, a parasitic plant that wraps its orange stems around more normal green plants, the better to feast upon them. 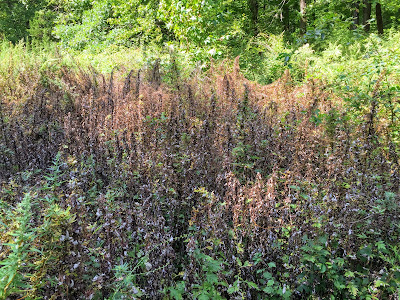 It was heartening to see how the dodder was preying upon the massive expanse of invasive mugwort extending along the gas pipeline right of way that divides Herrontown Woods in two. If the mugwort could be discouraged somewhat, other plants would have a chance to share the space. 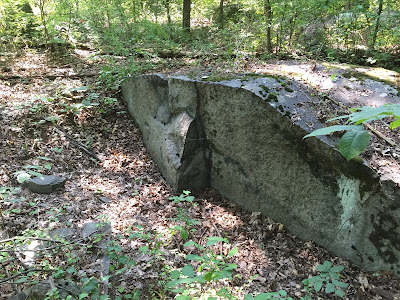 The new blue trail route passes by many cavities in the ground where the diabase rock was quarried long ago. 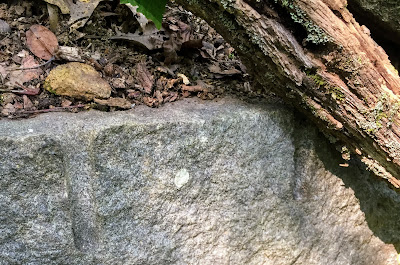 Drill marks show how the rocks were split into manageable blocks for toting away to places as yet unknown. One approach was to drill a series of holes in a long line, then put dry wooden pegs in the holes and add water. The expansion of the wood would provide enough pressure to crack the rocks. This imitates the way tree roots extend into cracks in rocks, then slowly expand with each year's growth until the rock splits. Small amounts of pressure well applied can have great power. 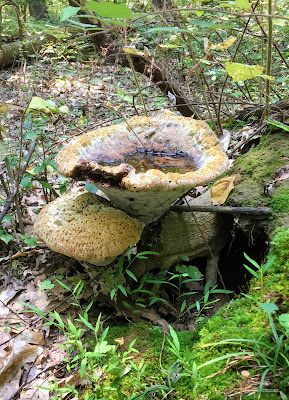 This mushroom is about a foot high, and very solid. 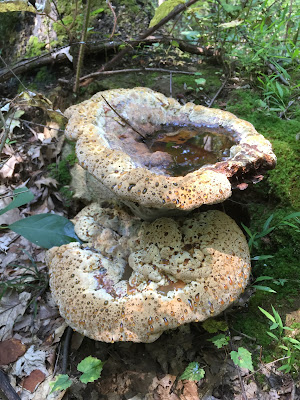 It's growing out of the cavity left by a fallen tree, much like a similar one found during last year's mushroom walk. 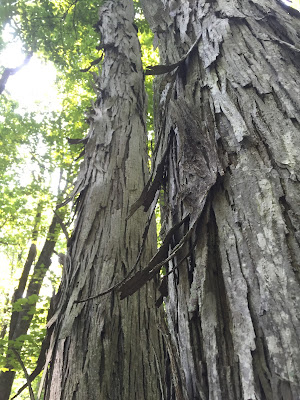 One of the walkers mentioned how bats use shagbark hickories for roosting at night. Sure enough, the internet is full of testimonials, by people if not the bats themselves. 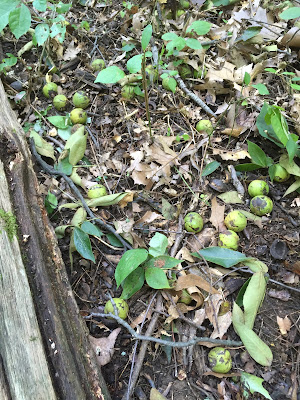 2017 is a great year for stalking wild hickory nuts, Euell Gibbons-style. All sorts of fruits and nuts are offering up bumper crops this year--pawpaws, Chinese chestnuts, hickories... 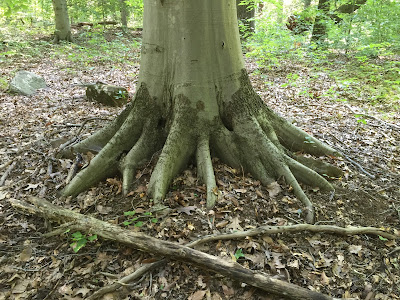 Passing by this highly photogenic beech tree along the nou-blue trail, friends Jeff and Fairfax expressed a strong interest in seeing the cardinal flowers, which appropriately are further into the woods on the red trail.

We headed over that way and, though I could not see it with the naked eye, 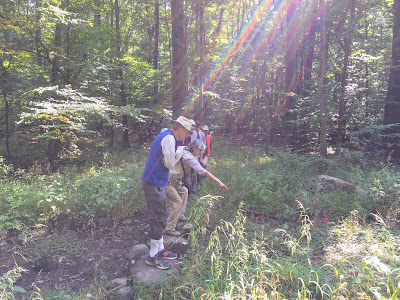 my camera captured the celestial light that bathed them as they encountered the cardinal flowers growing where this most pure of Harry's Brook's tributaries flows from the preserved headwater lands of Herrontown Woods. It's amazing what iPhones can detect. 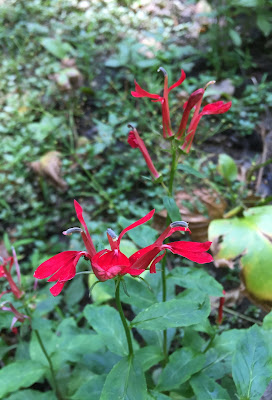 Here is the cardinal flower, Lobelia cardinalis for long. 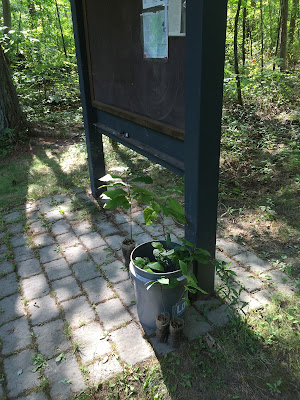 On the way out, hikers helped themselves to pawpaw plants, grown from local wild seed by Stan. The remaining seedlings will become another pawpaw patch in Herrontown Woods.

Thanks to all who participated and made this another pleasurable walk through lands preserved long ago by the far-sighted Veblens.