May Showers, May Flowers, and a Bright Red Barn Rising in the Woods 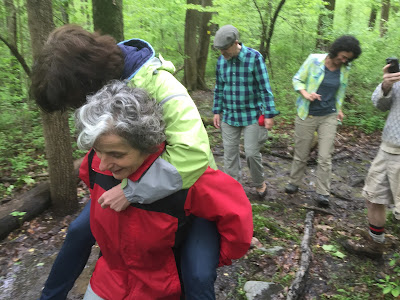 Our Saturday morning walk at Herrontown Woods, one of three in Princeton to celebrate Sophie Glovier's newly updated and republished book, "Walks Across Princeton", was wet and wonderful, as advertised. We sidestepped patches of mud, hopped from stone to stone, and in the muddiest patch, Zoe Brooks demonstrated proper trail etiquette by picking up a friend with less mud-friendly shoes. 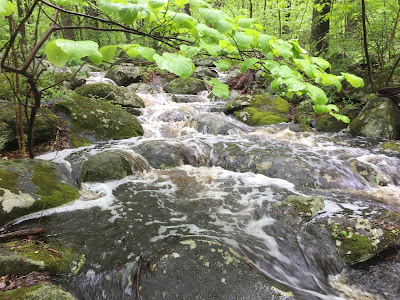 The muddy patches seemed a minor tradeoff for all the joys that water brings to Herrontown Woods. The day before, after a long rain, the abundant flow added its own art to the moss- and lichen-patterned boulders, cascading down from the preserved headwaters of this tributary of Harry's Brook. 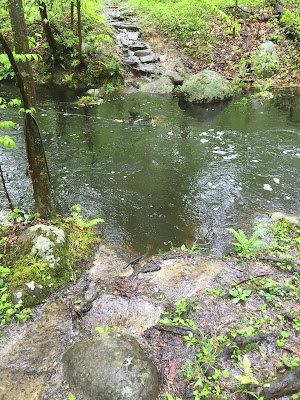 These timeless patterns of nature inspire even as the Friends of Herrontown Woods is working full steam ahead to save the Veblen House and other structures from an undeserved demolition. The Little Nonprofit that Could is straining at the seams as it pulls its train of logic up the hill, seeking to convince the powers that be to allow it to begin needed repairs to make these wonderful buildings an enduring part of Herrontown Woods' natural and cultural landscape.

(Proofreading this post, I see that the photo is saying "full stream ahead", a nice bit of serendipity.)

During the walk, while some of us identified wildflowers along the path, others carried on conversations about fundraising strategies. 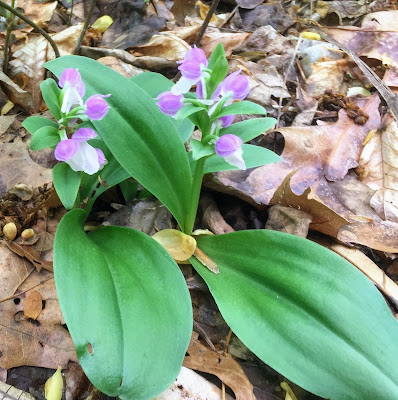 The full streams of the day before had receded in time for yesterday's walk, allowing us to see some of the wildflowers along the way. There are only two spots we know of where this special wildflower grows along the Princeton Ridge. It's called showy orchis, and we hear stories of how crowds of photographers would gather at Herrontown Woods to capture its beauty when it was in bloom. 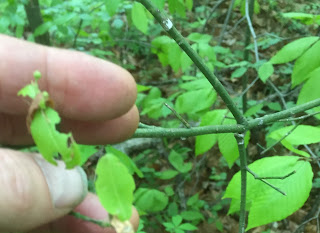 Another plant that has only been found growing wild in two spots in Princeton is the hearts 'a bustin (Euonymus americanus). Deer love it, therefore its rareness, compared to the ubiquitous nonnative winged Euonymus. 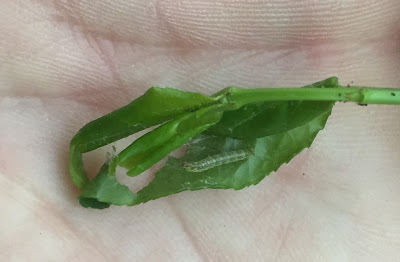 There's a caterpillar that also likes the native species, dealing a blow to most of its leaves. Ecosystems work by having the solar energy captured by plants move up the foodchain, e.g. as insects eat the plants and birds eat the insects. The nonnative Euonymus doesn't get eaten, outcompetes natives, and the forest becomes progressively less edible to wildlife. We've been "eating" the winged euonymus with our loppers, and interestingly, the deer have begun collaborating to some extent by eating the resprouts after we cut down the large bushes. The resprouts may be more edible because they haven't had time to manufacture the chemicals that put off the deer. In any case, we hope to make the native hearts 'a bustin more common, if a balance between plant and the wildlife that consume it can be struck.

There are also only two patches of a mysterious Viburnum species, still unidentified, and two Hepaticas known to grow along the ridge (not found during this walk), and two houses (the Veblen House and cottage--still there, at least for now).

Further into the walk, we stopped at the cliff, which is at the end of a short side trail that's not on the map. One participant saw a patch of blue in the distance and asked about it. That, I explained, is the blue tarp protecting the Veblen Cottage from rain until we can get access to do repairs. There's something very appealing about seeing a building in the distance, surrounded by woods. Many of the vistas at Herrontown Woods have been restored in recent years, as Friends of Herrontown Woods volunteers cut down the invasive shrubs that have blocked the views over time. The cliff, itself, was rediscovered only a couple years ago, when we happened to be working on a trail down below it, and saw a rock edifice that we'd only heard stories about. Herrontown Woods reveals its secrets slowly. 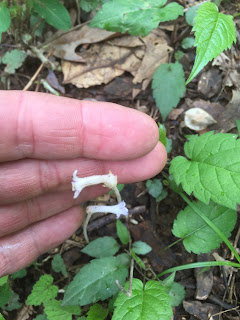 Heading towards the Veblen cottage and house, I happened to see a tiny flower along the trails edge. It's a parasitic plant called one-flowered broomrape. Here's a short article found online about parasitic plants. 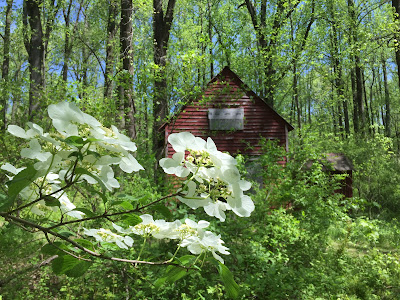 This photo of the barn was taken the day before. One of the walk participants, Margaret, who grew up near Herrontown Woods and visited it many times, told of her earliest memory of the preserve. She was walking up from the parking lot, and saw for the first time the bright red barn, surrounded by woods. It's one of many stories told of how the buildings add meaning to people's visits to the woods.

Syth told of a photo his parents took of him and his sibling with the barn in the background. When he in turn became a parent, he took a photo of his own sons from the same angle. 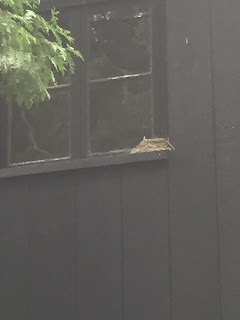 We headed over to the Veblen House to socialize. It, too, is pegged for demolition, even though it is a solid house with a fascinating history and beautiful woodwork inside, and is said by all architects and builders who have seen it to be unique in its construction and design elements. It doesn't look like much from the outside, but it has a double wall, which means that the tattered exterior wall can be removed like a scab and replaced. Photos from the 1950s show that the original color was a more attractive brown and black two-tone, with ornamental stairway and balconies.

While we delved into refreshments and conversation, a robin was feeding its young on a window sill. Our nonprofit is asking Mercer County for a chance to fix up this and the other wonderful structures that the Veblens donated long ago for public use. The robins know a good thing when they see it, and we think we do, too.

The photo below, taken several weeks ago, shows how someone planted daffodils to ornament the red barn and corncrib. The flowers were an act of love by those who preceded us at Herrontown Woods. What meaning would they have if the buildings were to be torn down? We need to honor this legacy, so that children in the future can wander into Herrontown Woods for the first time, and be surprised by a bright red barn rising up among the trees. 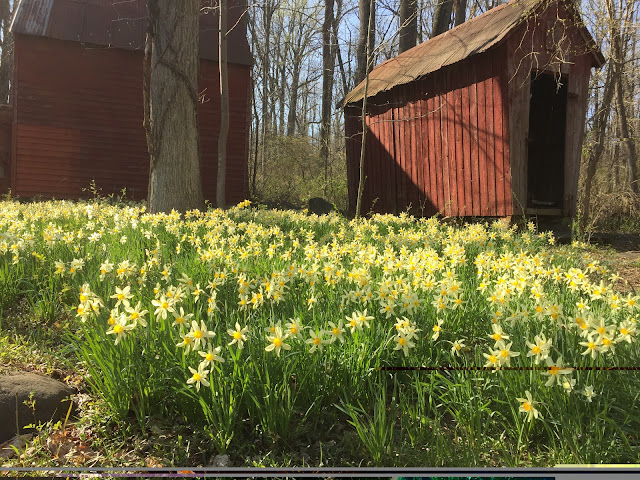