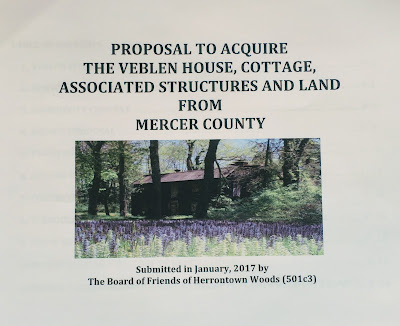 The Friends of Herrontown Woods (FOHW) has been busy over the winter. On February 3rd, we proudly submitted to Mercer County a proposal to acquire and put to a public purpose the Veblen House, cottage, and farmstead at Herrontown Woods. The document envisions, and details the projected costs of, what will be called the Veblen Center.

FOHW volunteers have long wanted to build on their success in restoring trails and habitat on the 140 acre preserve, by directing similar energy and skill to repairing the buildings. Research has revealed the uniqueness of the Veblen House's architecture, the extraordinary lives of those who lived there, and the importance of the buildings for enhancing Princeton's open space and preserving the historic integrity of Herrontown Woods.

Proposed first steps are improved weatherization and appearance of the structures, restoration of the grounds, interpretive signage, and events to take advantage of the lovely setting. FOHW is seeking permission from Mercer County to begin repairs prior to acquisition, to demonstrate that the buildings can be saved and put on a positive trajectory after many years of neglect.

The proposal describes the importance of this initiative:


Oswald Veblen was an internationally renowned mathematician whose vision, passion and drive greatly influenced the development of Princeton University and the Institute for Advanced Study. He can also be viewed as the founder of Princeton’s open space movement, not only by donating Princeton’s first dedicated nature preserve, Herrontown Woods, but also through his work to acquire 610 acres for the Institute that later became preserved as the Institute Woods.

The Veblens’ donation of the house and cottage to the public trust should not be viewed as an afterthought. As described in books like Turing’s Cathedral, Oswald’s love of buildings was as strong as his love of land, and can be seen in the opulence of Princeton University’s “utopia for mathematicians”, Old Fine Hall (now called Jones Hall), which he largely designed. When the Institute for Advanced Study was first being formed, Veblen argued strongly, and effectively, for giving the dispersed Institute scholars a permanent physical setting where they could better interact. The Veblen House and cottage can now serve in a similar way, as much needed infrastructure to complement the extraordinary corridor of preserved open space in eastern Princeton.