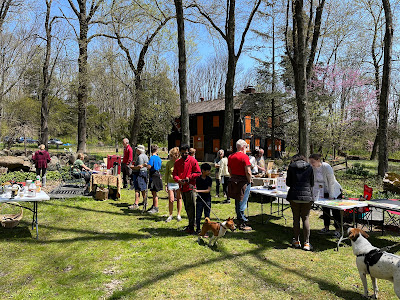 Graced by a beautiful day, the first annual Earthday celebration at Herrontown Woods was a delight beyond all expectations. Hundreds of people found their way to the preserve to learn and explore at an event we called "Becoming a Steward of Your Local Environment -- An Introduction." As described in a Town Topics article, the event was given first momentum by board member Inge Regan, and greatly helped by collaboration with staff at the Princeton Public Library.
With tables at Veblen House and at the Barden, and seven nature walks, it was the first event hosted by the Friends of Herrontown Woods that made full use of the preserve's many destinations. It also took the full participation of the board to coordinate an event with so many moving parts. 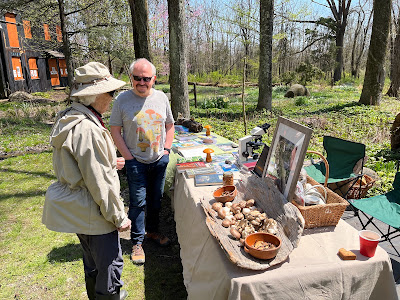 This elaborate display, put together by Philip and Joanna Poniz, introduced visitors to mushroom identification and lore. Princeton Public Library staff had a table on pollinators, to go with an exhibit they are hosting at the library. Other tables provided a chance to learn about invasive species, recycling, herbs and vinegars, and nature mandalas.
Nicole Bergman and her helpers hosted May's Cafes at both the Barden and the Veblen House. Something of a historic first for any organization: there were t-shirts available to buy. And Mathilde Burlion taught visitors about native plants, and sold some recently dug from the Barden. 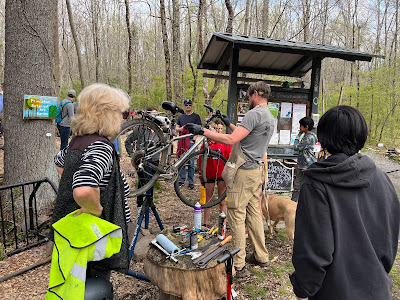 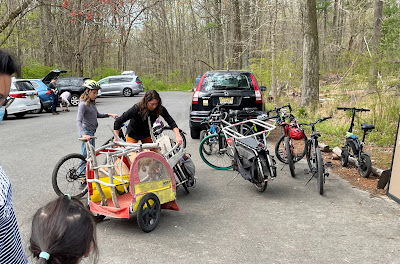 He, Georgette, and their four daughters seldom use a car, preferring to bike around town, towing their dog in a toddler trailer. 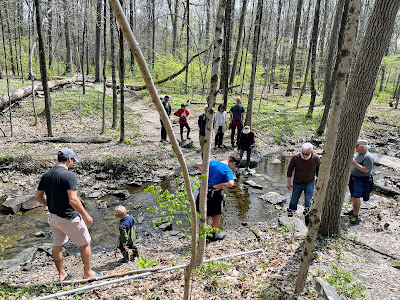 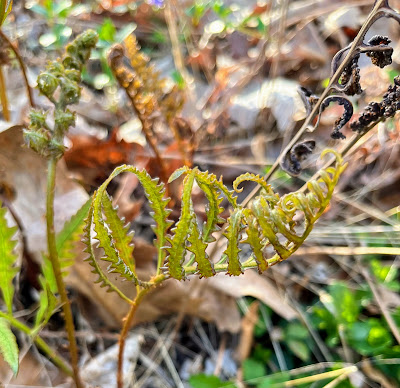 Plants like this sensitive fern were just opening up their leaves. 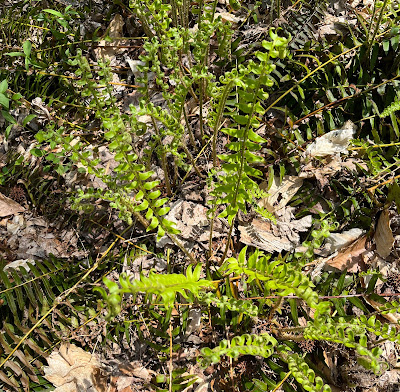 The evergreen Christmas fern was showing two generations of leaves. The darker leaves from last year lay flat on the ground, while fresh new leaves rise from the center. 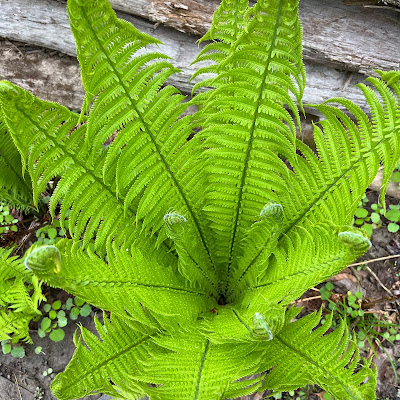 At the Barden, ostrich ferns were unveiling their fronds in a beautiful fashion. 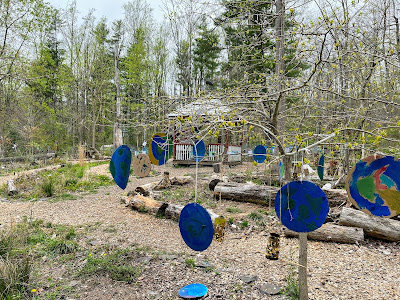 The event wound down around 3pm. The next day, painted earths still hung from a tupelo tree in the Barden.

In addition to this blog, the Friends of Herrontown Woods now has an honest-to-goodness website at HerrontownWoods.org. The new website is the go-to for the latest information on our organization and upcoming events. Many of the blog posts I have here can also be found on the new site. Thanks goes to Pilar Castro-Klitz and her team at More Canvas Consulting for building the new website. 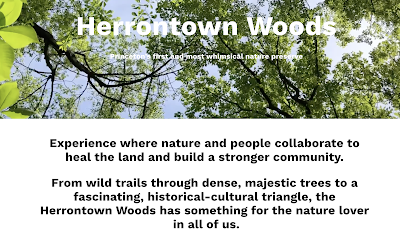 Herrontown Woods is starting to shake off winter and generate some color. 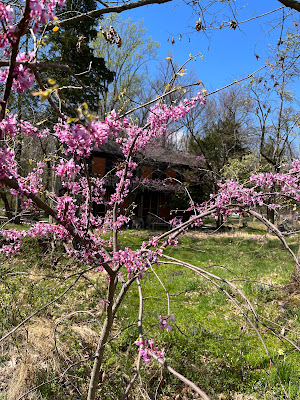 Redbuds young and old are blooming next to Veblen House, and there's one at the Barden. It's a native, though all of these were either planted or proliferated from trees planted previously. 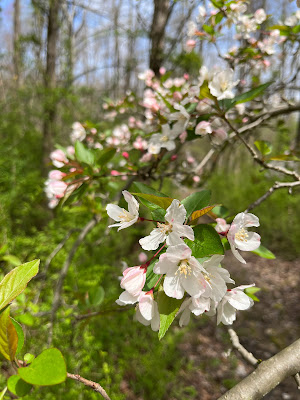 Dotting the woodland understory are crabapple trees. There is such a thing as a native crabapple tree, but I don't know if those at Herrontown Woods are among them. 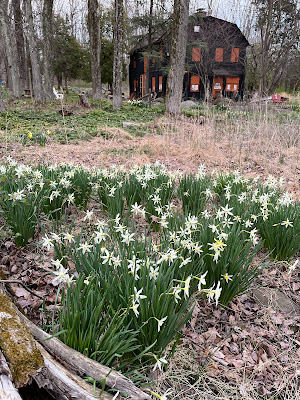 Daffodils have been in their splendor near Veblen House and Cottage. They could have been planted by Elizabeth Veblen herself, or by one of the garden clubs that worked hard to renovate the gardens after she died in 1974. The daffodils follow early sweeps of snowdrops and scilla. 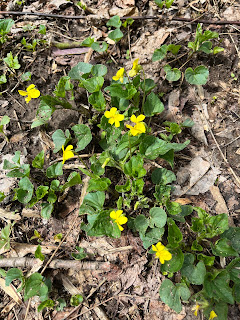 Less dramatic yellow is the native yellow violet blooming near the Veblen barn, the small red structure near the cottage.
Among other flowers to look for at Herrontown Woods this time of year are trout lilies, spring beauties, wood anemones and rue anemones. 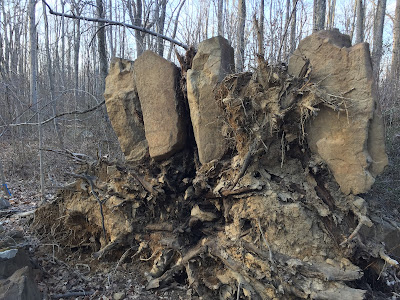 The aim is to reroute a few of the trails to minimize muddiness and highlight some of the features that would otherwise go unseen, such as these four big boulders that got lifted up into the air by a tree's rootball as it fell. 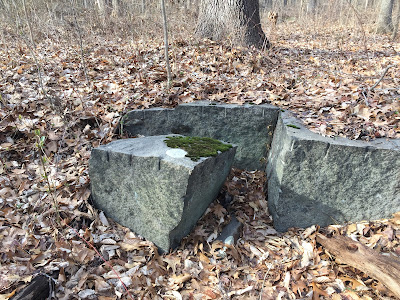 This old quarry site is hidden just fifteen feet from one of the trails. Click on the image and look closely to see the drill marks they used to split the boulder into chunks to haul away. That would have been about a century ago. 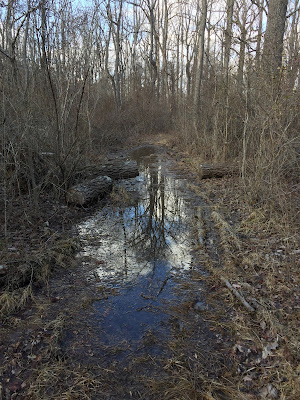 One thing we'd rather hikers not encounter is the ponding in some existing trails in late winter. Winter, when leaves have fallen and the woods is flooded with light, is the best time to search for better trail routes. In this case, we found higher ground running along an overgrown rock wall just a few yards to the left. 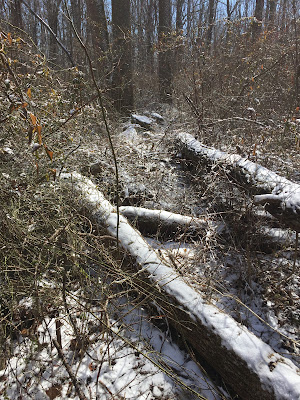 If we didn't get around to moving the trail years ago, it may have something to do with the incredibly dense tangle of invasive shrubs--autumn olive, Linden viburnum, privet, and worst of all, thorny multiflora rose. It took four work sessions to cut through the thicket that not only blocked access to a better trail route but also obscured part of the preserve's history--the rock walls that once bordered farm fields. 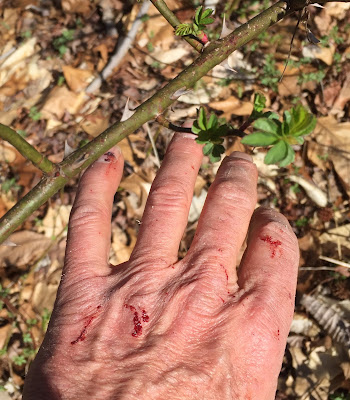 The fishhook-shaped thorns on multiflora rose punish anyone who thinks they can overcome this formidable, sprawling shrub with brute force. It takes a patient, even gentle approach to navigate through all the thorny branches to cut the shrub at the base. Even then, the thorns prove unavoidable. Anyone who forgets their work gloves will pay.
There's a payoff, though, for all the hard work of cutting through fallen trees and clearing invasive shrubs. Mixed in with the invasives are some native spicebush, high bush blueberry, and flowering dogwood. It's satisfying to rescue these from the burden of invasive overgrowth.
A few more work sessions and visitors to Autumn Hill will be able to better experience the preserve's historical and natural features while walking on drier ground. 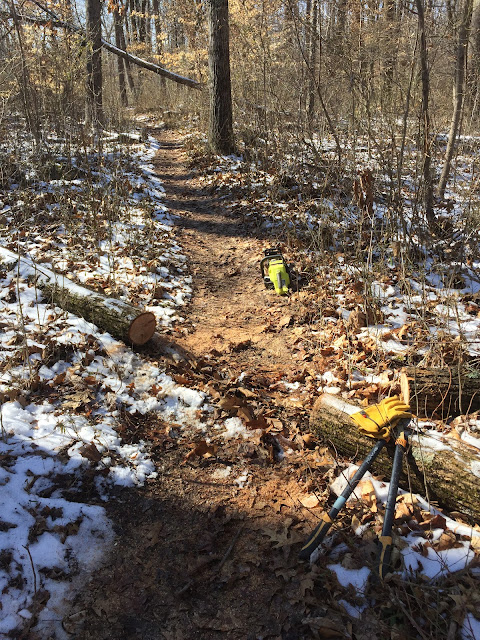 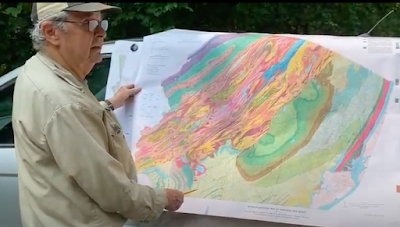 POSTPONED DUE TO PROBLEMATIC WEATHER
On Sunday, March 13, Princeton geology professor emeritus Lincoln Hollister will lead a guided walk through Herrontown Woods explaining the geological features and history of the area. If you thought the boulders were deposited by a glacier, you're in for a surprise.

The walk is at 1pm. A limited number of spots are available. Click here to sign up.

Next time you walk the yellow trail, notice how the boulders along the stream start out squarish, but become more rounded as you head up onto the ridge. These two shapes were produced in different geologic eras.

Bird and Plant Walk at Herrontown Woods this Sunday, Feb. 27

A bird and plant walk is coming up this weekend at Herrontown Woods, from 9-11 this Sunday morning, Feb. 27. We'll have multiple walk leaders with expertise ranging from botany to birds to amphibians. Princeton natives John L Clark and Fairfax Hutter will be joined by naturalist and Hopewell teacher Mark Manning and Steve Hiltner.
The walk is open to all. We'll have some extra binoculars in case anyone lacks a pair. Meet at the main parking lot off Snowden Lane, across from Smoyer Park
Thanks to the Princeton Public Library for helping get the word out about this event, which is in addition to our usual Sunday morning workdays that start around 10:30.
Posted by Steve Hiltner 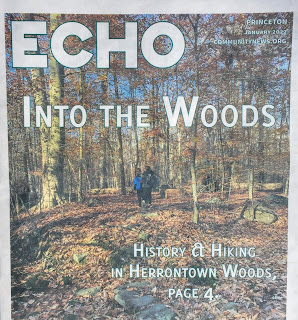 The Princeton ECHO is starting 2022 with a wonderful feature article on Herrontown Woods. The article is written by Patricia A. Taylor, who took her grandkids to the preserve and had great fun exploring the trails and the Barden. The article, entitled "History and helpful hands in Herrontown Woods," explores the history of the preserve and our Friends of Herrontown Woods nonprofit. She also tells the story of the dugout canoe in the Barden, and how it was originally constructed for an Odyssey project at Princeton High School.
Ms. Taylor is hoping readers will be inspired to explore Princeton's open space preserves in the winter, when the woodlands are filled with light and long vistas. Copies of ECHO are available downtown, at the Shopping Center, and elsewhere. 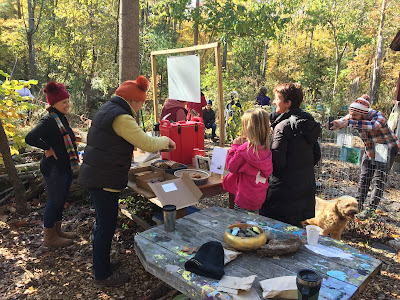 May's Barden Cafe welcomes the new year at Herrontown Woods this Sunday morning, Jan. 2, from 10am to noon. Stop by for some fine coffee and pastries, served up near the Barden's gazebo. just in from the main parking lot off Snowden Lane. Nicole Bergman has been teaming up with Joanna Poniz to host the Cafe, with coffee from Small World.

The event--first Sundays through the winter--coincides with the weekly Herrontown Woods workdays, making for a nice mix of socializing and volunteer activity.

May was the nickname for Elizabeth Veblen. She and her husband Oswald donated Herrontown Woods long ago, and also started the tradition of afternoon tea at the Institute for Advanced Study.

The road down to Herrontown Woods is directly across from the main entryway to Smoyer Park. 600 Snowden Lane is now the official address for the parking lot. 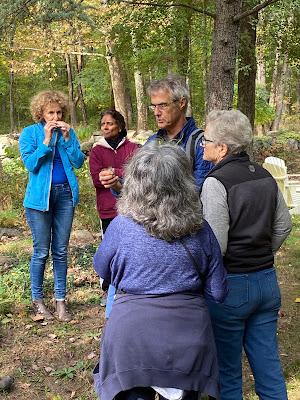 To take advantage of lingering fall colors, Steve Hiltner will lead two nature walks this Sunday, Nov. 14, at 10am and 1pm. The Princeton Public Library is helping organize the 10am walk (shifted to Sunday from Saturday due to freakish weather forecast), so the morning walk may be more crowded. If you aren't already signed up through the library for the 10am walk, it would be best to come at 1pm if possible.
Meet at the main parking lot off Snowden (600 Snowden Lane) across from Smoyer Park. Extra parking at Smoyer Park if needed.
Sturdy shoes recommended.
The usual Sunday morning workday will be happening as well.
Posted by Steve Hiltner

Update: Through the cooler months, May's Barden Cafe will be open the first Sunday of each month, from 10-12, weather permitting. Mark your calendar for Nov. 7, Dec. 5, and so on.

There's a delightful new happening at the Barden in Herrontown Woods. Nicole Bergman, with help from Joanna Poniz, is hosting May's Barden Cafe. 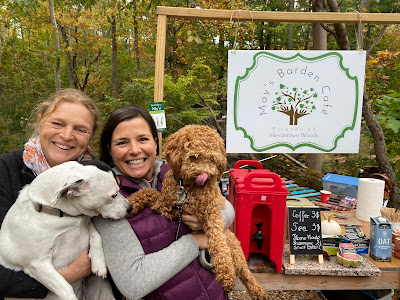 From 10-12 on Sunday, Oct. 24, they served coffee from Small World and some teas, along with a delicious pastry Nicole made. 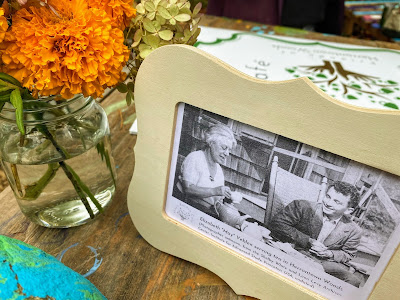 The name comes from Elizabeth Veblen's nickname May. Born in England, May was the force behind developing the tradition of tea in the Princeton math department and also at the Institute for Advanced Study. Nicole and Joanna are very much taking a cue from the Veblens' love of bringing people together.
The pleasure of conversation and drink mixed well with the weekly workday that was going on at the same time. There's seating and tables at the gazebo as well as at various places along the pathways.
Future openings of May's Barden Cafe are planned for the first Sunday morning of each month, 10-12. That would make Nov. 7 a good time to come by. Thanks to Nicole and Joanna for bringing this idea so quickly from inspiration to fruition. 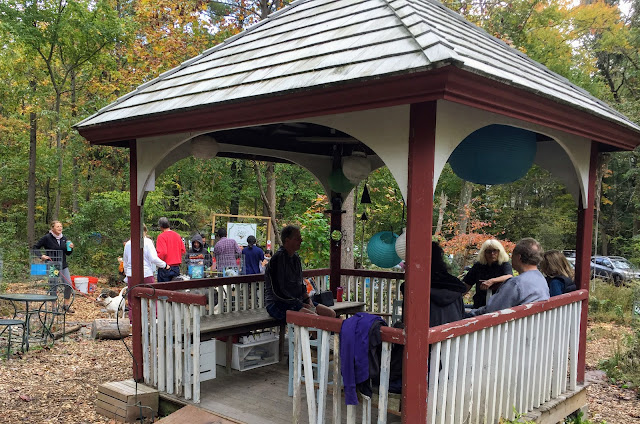 Thanks to FOHW board member Inge Regan for the first two photos in this post.